‘s final outing as divided viewers as the long-awaited hit cinemas in the early hours of Friday morning, with many flooding to issue reviews.

After the world premiere at the Royal Albert Hall on Tuesday, critics lavished praise on the much-delayed movie, and while many armchair reviewers agreed that the movie was ‘brilliant and special’ others were less pleased with the departure Ian Fleming’s original depiction of 007.

British fans of Bond’s latest outing  – who have been able to watch the much-anticipated movie a week before American fans  –  took to the microblogging site penned: ‘James Bond was brilliant… #NoTimeToDie is a special, special film… awesome. Absolutely bl***y brilliant. Loved every minute of it… James bond was well worth the wait… the former glory is restored… best Bond in many years for me.’

Hot on the heels of claims the 25th Bond film is ’00-woke’, others insisted the new take on the supersleuth Lothario was ‘a liberty’: ‘I think they’ve taken too many liberties and moved away from Ian Fleming’s James Bond if that makes sense?… [this has] utterly ruined the character for me.’

History: Daniel Craig’s final outing as James Bond divided viewers as the long-awaited No Time To Die hit cinemas in the early hours of Friday morning, with many flooding Twitter to issue reviews

The glowing reviews from devoted fans read: ‘James Bond was brilliant… #NoTimeToDie is a special, special film, and a perfect end to Daniel Craig’s tenure as Bond. He reinvented the role, and for me? He IS James Bond. Thank you for the past 15 years. It’s been a pleasure Commander Craig #WeHaveAllTheTimeInTheWorld…

‘No spoilers, but best Bond in many years for me. Also just going to the cinema for the first time since covid was class… Cheeky trip to the cinema to see Daniel Craig’s swan song as @007 and what a swan song it was. Bravo Mr Craig, sad to see you go but very glad you became Bond, James Bond. #NoTimeToDie…

‘Loved it going again at weekend to watch… and it finally felt like a proper cinema night with nigh on a full house their was great to see it after so long… Went to the cinema to watch #JamesBond #NoTimeToDie last night, and it was epic #NoSpoilers… I had the ending spoiled in the gents at the cinema before the film started…

Long wait! Fans are seen queuing to watch the movie in Leicester Square on Thursday evening

Suave: After the world premiere at the Royal Albert Hall on Tuesday, critics lavished praise on the much-delayed movie, and while many armchair reviewers agreed that the movie was ‘brilliant and special’ others were less pleased with the departure Ian Fleming’s original depiction of 007

data-fff_capped_bodys_first_paragraph=”The Bond premiere was the hottest ticket in town on Tuesday, and all eyes wer…” data-fff_share_url=”” 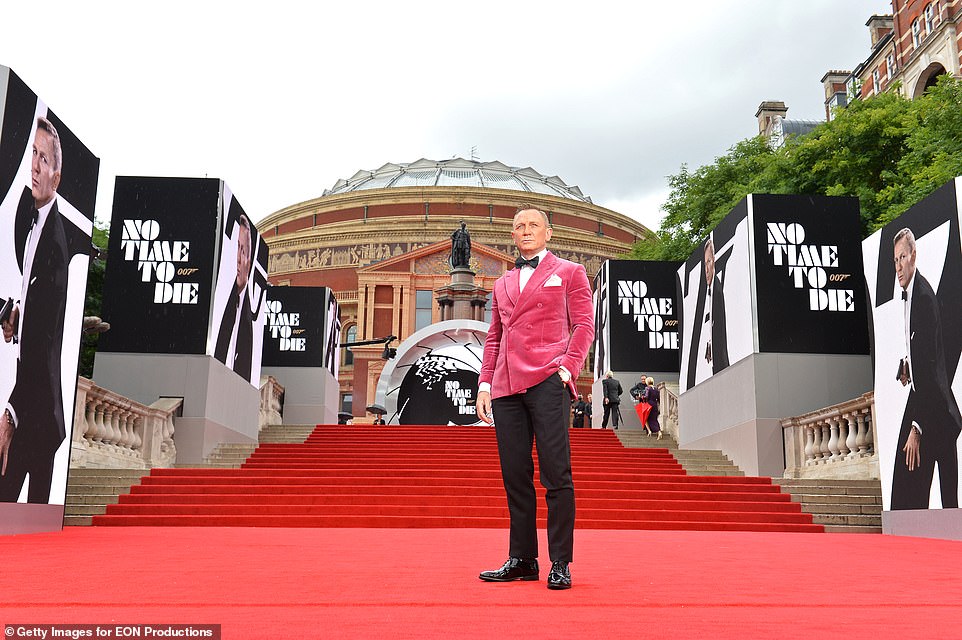 Get Casino Royale style in a velvet blazer like Daniel Craig

The Bond premiere was the hottest ticket in town on Tuesday, and all eyes were on Daniel Craig (and the Duchess of Cambridge, obviously).

Daniel looked sharp as ever for the occasion, dressed in a velvet suit jacket by Anderson & Sheppard as styled by George Cortina.

Of course as 007 Daniel would only wear a bespoke suit, which was custom made for him at Anderson & Sheppard's workshop and haberdashery in Mayfair.

If you're in the market for a new suit, then click to learn more about Daniel's design, or let your bank balance die another day with the more affordable options in the carousel.

MailOnline may earn commission on sales from these product links

Yay! Many fans praised the movie and insisted it was worth the wait

‘But despite that I thought it was excellent… So, I saw #NoTimeToDie this evening and I loved it but, hated it. I was a rage monster leaving the cinema. @007 WHAT did you do that for? WHY???? Fix it. #007NotJustANumber…

‘So it happened, first time in a cinema in over 2 yrs & first film to see was #NoTimeToDie. That was so well worth the wait… #DanielCraig is the ultimate James Bond…awesome. Absolutely bl***y brilliant…

‘Loved every minute of it… James bond was well worth the wait. Although sitting in a packed cinema felt weird. Bring back lockdown… all is forgiven. We were worried after #Spectre but the former glory is restored. Everyone get out, support your local #cinema and see #NoTimeToDie . What an experience…

‘@007… Flawed, 25 minutes too long…and it will divide hardcore Bond fans…but…I really, really enjoyed No Time To Die – an absolute blast to experience in the cinema and ultimately a very fitting end to Daniel Craig’s run as Bond…James Bond #NoTimeToDie [sic]’

Naysayers however clashed with fans of Daniel’s final outing, with critics penning: ‘Who’s seen the new Bond film? I must admit I was disappointed… Yep me too – I think they’ve taken too many liberties and moved away from Ian Fleming’s James Bond if that makes sense?…

Not too pleased: Others were less than happy with the spin on the movie

Changing the game: Fleabag creator Phoebe Waller-Bridge was brought in as a scriptwriter to ensure the blockbuster was appropriate for the #MeToo era – with the flick billed as the most politically correct and ‘woke’ James Bond movie yet, with outdated sexism banned

‘I really enjoyed half the film, the 2nd half however has utterly ruined the character for me. That was not a Bond film to me, more of a spoof than anything. Beyond gutted… was anyone else bitterly disappointed with latest @007 outing? Even as a huge Bond fan it just didn’t do it for me!…

Changes: The movie was previously supposed to come out on April 2, however its original release was supposed to be in April 2020 (pictured Daniel Craig

The changes in question come as Bond’s lothario antics appear to have fallen by the wayside as he swaps casual romps for handshakes and camaraderie with his female castmates.

The 25th film in the franchise sees strong female characters stake their claim on the storyline- with Lashana Lynch as British secret agent Nomi, along with Ana De Armas as Cuban agent Paloma, joined by psychologist and Bond’s love Madeleine Swann, played by Lea Seydoux.

Fleabag creator Phoebe Waller-Bridge was brought in as a scriptwriter to ensure the blockbuster was appropriate for the #MeToo era – with the flick billed as the most politically correct and ‘woke’ James Bond movie yet, with outdated sexism banned.

Therefore, while No Time To Die sees the typical explosive Bond drama beloved of the franchise, 007’s previous history of adding notches to his bedpost is very much an afterthought – with the agent seen building a friendly rapport with his female colleagues, rather than trying to seduce them.

In one scene, Bond asks Paloma to turn around as he changes, before shaking hands with her in a scene of mutual respect and understanding following a dramatic fight scene.

They are also seen praising each other’s work – and, while Bonds of yesteryear would have seen the suave agent delivering some smooth lines and bedroom eyes before tumbling into a passionate embrace, the pair keep it cordial.

Teamwork: The focus has shifted to teamwork and healthy competition, with no scrimping on the action that fans of the franchise adore

No time to say goodbye! Daniel Craig is credited for his ‘extravagantly satisfying’ (and unapologetically woke) Bond swansong… as ‘slick, stylish and emotional’ No Time To Die wins five star reviews

After an 18-month Covid-induced delay the premiere for  – ‘s final outing as  – took place at the Royal Albert Hall on Tuesday.

Craig stepped out alongside co-stars Lashana Lynch, Lea Seydoux and Ana de Armas to introduce critics, royals and stars alike to the Cary Joji Fukunaga-directed blockbuster – with a thrilling outcome from the other side.

The Daily Mail’s Brian Viner gave Bond’s ‘daring, tense and explosive’ 25th outing four stars, writing that ‘the thunderous ovation that rocked the venue as the end credits rolled was not misplaced’.

Reviews from around the world soon flooded in with a slew of five star accolades for Craig’s swansong – along with gushing praise over the movie’s ‘magnificence, glee, extravagance and bulgingly proportions’.

Finally here: After an 18-month Covid-induced delay the premiere for No Time To Die – Daniel Craig’s final outing as James Bond – took place at the Royal Albert Hall on Tuesday

Teasing an ending that ‘no one saw coming’, Viner hailed No Time To Die as ‘a triumph’, gushing: ‘[No Time To Die is] an explosive, tense, daring, and most of all surprising adventure, toying with our preconceptions about the world’s greatest secret agent and exploring his personal life more intimately than ever before.’

On the fact that Craig’s fifth and final outing as Bond was filmed in a post Time’s Up era, Viner notes: ‘Is there now a danger of the character tilting too far away from the callous ladykiller of yesteryear, becoming 00-woke?…

‘Yes, there is. However, not least of the achievements of this exciting movie is that it feels progressive, while staying faithful to the spirit of Bond. This is a serious film, and it will leave you seriously blown away.’

Leading man: Daniel, 53, oozed sophistication ahead of his final outing as James Bond when he walked No Time To Die’s world premiere red carpet on Tuesday